When vacationing in Branson here are some awesome activities you can do!

Check out some Live Shows

Proclaimed as the “Live Music Capital of the Entire Universe” on “60 Minutes” let the sounds of sweet bluegrass and Broadway show tunes carry you away. With over 100 live performing in Branson theaters thought the year there’s no shortage of entertainment options during your visit. Fans of country music, rock, gospel, R&B, comedy, magic and everything in-between will find something to love here!

Cast a line for some bass and trout fishing just minutes from downtown! With three pristine lakes, you’ll have no problem finding some other water activities to do if you’re not a fisher. There are also some awesome hiking, biking, and horseback riding trails, with some great picnic spots for when you need a break. Have you ever heard of geocaching? That’s when you search for a hidden object by means of GPS coordinates posted on a website. If you never tried it you can in Branson! Or you can check out the Silver Dollar City Attractions including: Silver Dollar City, Showboat Branson Belle, and White Water. Silver Dollar City is an awarded 1880s-style theme park located in Branson, Missouri, that features over 40 thrilling rides & attractions, live shows & concerts, 100 resident craftsmen. Showboat Branson Belle is a 2-hour cruise including a delicious 3-course meal with live music with an array of entertainment! White Water is a 13 acres water park consisting of awesome rides and slides!

You could also play some golf with seven courses to choose from. There’s also White Water Branson which is a 13-acre commercial recreational water park with a wave pool for swimming, water rides, private poolside cabana rentals, dining and shopping!

Do some shopping at Branson Landing 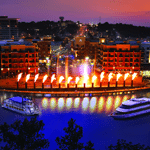 Branson Landing has over 100 shops and restaurants, and is an open-air waterfront shopping center! Walk down the boardwalk and check out the $7.5 million dollar water attraction that features the first-ever merging of water, fire, light and music. You’ll be amazed by the dazzling interplay of water fountains shooting 120-foot geysers and fire cannons blasting, all choreographed to light and music!

A family owned and operated zoo, the Promised Land Zoo is located on Shepherd of the Hills Expressway. Some attractions include Bottle Feeding Babies, Live Animal Show, and Tug-of-Roar. Some of the animals you will see include antelopes, big cats, kangaroos, zebras, and many more. You’ll be able to see antelopes, big cats, kangaroos, zebras, and many other animals. If you choose to do the Exclusive Encounters, you’ll get the opportunity to feed and play with certain animals like kangaroos, lemurs, and sloths. 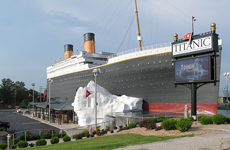 This isn’t your normal museum, located on Country Boulevard, the Titanic Museum is a two-story museum shaped like the Titanic and anchored in water. Built to be half the size of the original ship, the museum opened in 2006. Visitors enter the museum through an artificial iceberg and are given a ticket on which appears the name of an actual Titanic passenger.

Consisting of six museums of different toy collections, the kid inside of you is sure to get excited! It’s not just a museum either, you can also purchase some of your favorite toys! with over 1 million toys, it’s easy to see why its called the World’s Largest Toy Museum!

The Butterfly Palace & Rainforest Adventure is a tropical-themed attraction with a butterfly aviary, rainforest discovery center & mirror maze. Take a stroll among thousands of live tropical butterflies from exotic rainforest all over the world.

Located on Silver Dollar City Parkway, Marvel Cave lies under the Silver Dollar City Theme Park. Local Osage Indians discovered the cave sometime before 1500 AD, and Spanish explorers found it later on. They thought they saw marble, so the cave was named Marble Cave, later to be changed to Marvel Cave. The cave opened for tours in 1894 and was the first major attraction in the Branson area.

Established in 1847 by German immigrants, The Stone Hill Winery is the second largest winery in the world. Take a 20 minute wine tour to learn more about the history and process of making the wine! Stone Hill wines are world renowned, winning eight world’s fairs gold medals. Including Vienna in 1873 and Philadelphia in 1876. 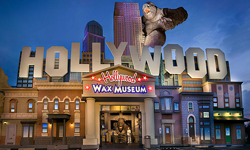 A Highway 76 landmark, the Hollywood Wax Museum is the only wax museum in the country devoted entirely to celebrity figures. Having a recent multi-million dollar renovation, the museum brought in more star power and dynamic style to the attraction.

Get ready for your Branson, Missouri trip with a St. Louis Toasted Ravioli recipe! You can also check out a Customer Testimonial From Eagle’s Nest Resort at Indian Point!

Branson, Missouri has some of the best mountain views, but did you know it has a two story Titanic museum? https://t.co/Ouw3tmVSm5 pic.twitter.com/cnKvLeGQS3