Did you know there are over 400 theme parks and attractions in the United State alone? There’s just something about screaming at the top of your lungs while going 128 miles an hour down a 270 degree drop that people can’t get enough of! If you’re looking for some of the best rides and theme parks in the United States that are in driving distance of Sundance Vacations properties, then these are some you’ll want to check out!

Opened in 1975, Busch Gardens Williamsburg is located on 383 acres in James City County, Virginia. Themed around various European countries, it was originally called Busch Gardens: The Old Country.
It has also been voted as the world’s most beautiful theme park since 1990! The park has 8 roller coasters and more than 100 attractions!

Alpengeist
Named after the legendary snow beast, Alpengeist travels at 67 miles per hour while hurtling you through 6 inversions!

Apollo’s Chariot
At speeds up to 73 miles per hour, 4,882-foot-long, 170-foot tall purple roller coaster is a guest-favorite! Sitting in an elevates seat, riders get a “free-flight” feeling!

Kingda Ka
The nickname of “King,” is due to the fact that it’s the tallest coaster in the world and fastest roller coaster in North America! Once you leave the station, you’ll go from 0 to 128 miles per hour in just 3.5 seconds! After going up a 90-degree angle, you’ll drop straight down a 270-degree spiral!

Nitro
With no shoulder restraints and no sides on the cars, you’ll really feel the speed of 80 miles an hour after the 215 ft drop. This lightning fast track takes you to a pair of gut-munching horizontal loops, a crazy 540-degree helix spiral, and then a series of camelback hills to finish you off.

Originally opened in 1906 as a leisure park for the employees of the Hershey Chocolate Company, the park is privately owned by Hershey Entertainment & Resorts Company as of 2016. Situated on 121 acres, Hersheypark has 14 roller coasters, and a total of 79 rides!

Skyrush
After a 200-feet climb, the downhill speed reaches 75 miles per hour, making it the tallest and fastest roller coaster at Hersheypark!

Storm Runner
Launching you from 0 to 72 miles per hour in 2 seconds, Storm Runner is the first hydraulic launch coaster to feature inversions. With a 135-foot cobra loop, barrel rolls, and a dramatic flying snake dive, this is a ride you’ll want to check out!

Great Bear
Ride below the track as you’re lifted 90 feet off the ground at speeds up to 61 miles per hour!

Known as “America’s Roller Coaster,” Cedar Point was opened in 1870, and is the second oldest operating amusement park in the United States! Cedar Point has 17 roller coasters, and a total of 72 rides! In 2018, Cedar Point introduced Steel Vengeance; the tallest, fastest and longest hybrid roller coaster in the world.

Maverick
Described as a bucking bronco, Maverick involves many twists, corkscrews, launches, tunnels, and plenty of airtime! After being in a pitch-black tunnel, you’ll get launched 400 feet at 70 miles per hour! Maverick received the Golden Ticket Award for “Best New Ride in 2007”.

Busch Gardens Tampa is a 335-acre African-themed animal theme park with more than 12,000 animals and 18 rides!

Cheetah Hunt
Cheetah Hunt is a 60 mile per hour steel launched roller coaster that opened in 2011. Located alongside a new cheetah exhibit, at a length of 4,400 feet!

Sheikra
After climbing 200 feet, the 90-degree drop will send you straight down at 70 miles per hour! With an Immelmann loop, a second dive into an underground tunnel and a splashdown finale that drenches SheiKra® fans!

Cobra’s Curse
Cobra’s Curse is a steel roller coaster that gives you’re a different experience every time you go on! The spins are random, with frequency and direction determined by the rider weight distribution.

Opened in 1967, as Six Flags second of the three theme parks, Six Flags Over Georgia is located on 290 acres, and has 12 roller coasters, and more than 40 total rides!

Twisted Cyclone
Formally known as Georgia Cyclone, the Twisted Cyclone gives the ultimate combination of wood and steel! It doesn’t just have the word twisted in its name, during the ride you’ll go upside down through three wicked inversions and up to 50 miles per hour giving you that cyclone feeling!

Mind Bender
Marked as “the world’s first triple-loop roller coaster” when it opened in 1978, the Mind Bender is still just as popular as it was when it first opened!

Opened in 1975, Kings Dominion is derived from the name of its sister park, Kings Island, and the nickname for the state of Virginia, “Old Dominion”. Featuring over 60 rides and 13 roller coasters, its Virginia’s destination for summertime fun!

Intimidator 305
The Intimidator 305 isn’t just its name, 305 is the height this steal coaster takes you before sending you 90 miles per hour! After the drop, the ride mostly hugs the ground, but Its incredible pent-up energy is instead used to intimidate riders by sending you tearing!

Dominator
Originally opened as Batman: Knight Flight, Dorminator through five inversions at speeds up to 67 miles per hour on the longest floorless steel roller coaster in the world. Dominator is also one of the largest vertical loops in the world!

Racer 75
Racer 75 is a wooden roller coaster which features a racing roller coaster layout with two individual tracks that are mirror images of one another. Riders fill up both sides as they race to the finish line!

Raging Bull
This steel roller coaster is the world’s first hyper-twister roller coaster, and at 202 feet tall, 5,057 feet long, and 73 miles per hour, it’s the tallest, longest, and fastest coaster at the park. With all the turns, twist, and speed, it will feel like a bull is trying to shake you off!

Goliath
Goliath is the world’s tallest, fastest, and steepest wooden roller coaster! Climb up to 180 feet before you reach speeds of 72 miles per hour down the 85-degree vertical!

Batman: The Ride
This steel inverted roller coaster based thematically on the 1989 film Batman. There are a bunch of identical coasters at other parks, most of which are also called Batman: The Ride. But the first one debuted at Six Flags Great America in 1992. It is also the world’s first inverted coaster in which the trains hang beneath the track.

Located in the Knoxville-Smoky Mountains metroplex in Pigeon Forge, Tennessee, Dollywood is jointly owned by entertainer Dolly Parton and Herschend Family Entertainment.  Dollywood opened in 1961, and now has 8 roller coasters and a total of 40 rides and attractions!

Wild Eagle
The Wild Eagle is America’s First Wing Coaster which takes riders on a unique experience that feels as if they are actually soaring high above the Smoky Mountains at up to 61 miles per hour!

Tennessee Tornado
Debuted in 1999, Tennessee Tornado is a triple spiral-looping coaster that makes you feel like you’ve landed inside a funnel cloud as you drop 128 feet through an actual mountain at speeds nearing 70 miles per hour!

Mystery Mine
After a raising 95-degree, 85-foot vertical drop, riders will be plunged into darkness as they enter the abandoned coal mine! Find out what’s at the end of the tunnel!

Originally opened in 1971, Disney world now has four theme parks, and two water parks!
Read all about our favorite rides, attractions, and shows that the parks have in our blog post: Sundance Vacations Orlando Family Vacation! 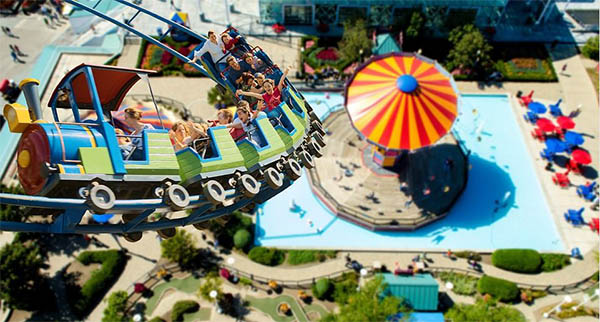 PreviousThings to do at the Finger Lakes!NextWildwood Family Vacation