The Transportation Security Administration (TSA) is taking some heat this week for a number of failed tests to detect mock explosives and weapons.

According to a report from the office of the Inspector General, a group of agents, known as the “Red Team”, conducted random testing at dozens of airports across the country and found some startling results.

Out of 70 tests, TSA Security Screeners failed to prevent forbidden items, such as weapons and explosives, from getting past them 67 times.  That’s a 95% fail rate.

In a report from ABC News, one of the Red Team Agents was stopped after setting off an alarm at the security checkpoint, however the TSA Screeners failed to find or detect the fake explosive taped to his back.  Similar tests have been conducted as far back as 2008, yet it still appears that the TSA has failed to learn from these past mistakes.

In response to this startling news, the Department of Homeland Security (DHS) announced Monday that the acting TSA administrator, Melvin Carraway, would be relieved of his duties and reassigned elsewhere.  It is still unclear as to where he will be moved, however in the meantime, Deputy Director Mark Hatfield will take over the TSA reigns. 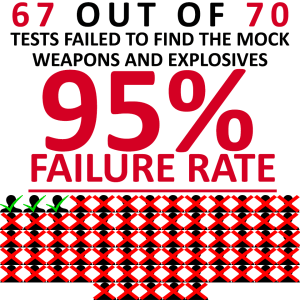 Adding to the reassignment of the TSA administrator was the news from the Department of Homeland Security.  ABC News obtained a written statement from the DHS that said, “Upon learning the initial findings of the Office of Inspector General’s report, Secretary Johnson immediately directed the TSA to implement a series of actions, several of which are now in place, to address the issues raised in the report.”

Again, it is still unclear what those changes and actions are, as the TSA has remained quiet on the issue, most likely for security reasons.

The question now becomes whether it is a failure of TSA equipment, training, employees or even worse, a combination of all of them.

In the last few months of 2014, another review conducted by the Red Team Agents uncovered a number of “vulnerabilities” in the way that the TSA was handling checked baggage screening across the country.

That very same review determined that although the TSA had spent $540 million for equipment to help screen the baggage and another $11 million to help train the people that would be operating it, the TSA failed to make any noticeable improvements since a previous test conducted in 2009.

These findings are a serious issue that need to be corrected, not just because of the money that is being wasted on it, but for all travelers’ safety and wellbeing.

Summary
Article Name
TSA Drops the Ball on Security Tests
Description
The Transportation Security Administration (TSA) is taking heat this week as they had a fail rate of 95% during tests conducted on screening procedures. They failed on 67-out-of-70 possible times, which is a serious cause for concern to the general public and travelers everywhere.
Author
Russ Hryvnak
PreviousA Haunting in the PoconosNextSundance Vacations Fly Away: A Traveler’s Review